Grense Jakobselv is a green valley 60 km east of Kirkenes. In the river runs the Russian border and on the way there you drive past Norway’s oldest mountain formation. This is a popular tourist spot during the summer months, and is a perfect place to experience the Midnight Sun. 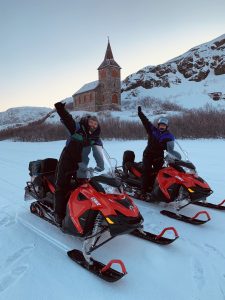 Farthest to the northeast, where the Norwegian-Russian border meets the Arctic Ocean, a small stone chapel with 70 seats marks that Norway begins here. The border between Russia and Norway was drawn up in 1826, but the population of the two countries was long unfamiliar with the new border. Russian fishermen were often on the Norwegian side, and there were several episodes. In 1851, the village Grense Jakobselv, where the border meets the sea, received permanent Norwegian settlement. The religious competitor in the area, the Russian Orthodox Church, was already strongly marked with the Boris Gleb Church right up to the Norwegian border by the Pasvik River.

The church was built to mark the border:
To mark the border, the Storting paid for the construction of a church. The architecture reflects Western European ideals, with neo-Gothic forms in gray stone. The church tower is visible far out to sea, so no one could be in doubt about where the border went. In 1869 the church was consecrated as “a spiritual watchtower against the various denominations of the Eastern Colossus”.

Grense Jakobselv no longer has a permanent population. In the wintertime, the final 25 km of the road is closed and the only way to reach Grense Jakobselv is by snowmobile.

Beach at the Barents Sea 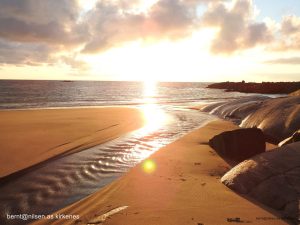 Where the road ends you will find a parking lot and incredibly nice views of the Barents Sea. If the weather is clear, you can look over to the Varanger Peninsula. The midnight sun can be observed here in the evening so we recommend this as an evening trip or overnight trip. If you are really lucky you can see Beluga whales. You are guaranteed a great nature experience with lots of wildlife and many different bird species. Bathing is recommended even if the water rarely has more than 10 C.

How to get there

From Kirkenes, follow the E6 to Hesseng. At the roundabout, follow the road towards Russia E105. At Storskog, turn left and follow road 886 to Grense Jakobselv. The road is signposted completely from Hesseng.
The road is closed for the winter from Vintervollen (30 km before Grense Jakobselv) from Oct – May. In winter only accessible by snowmobile.

Places to stay and eat

In Grense Jakobselv there are no permanent residents anymore. Only summer guests stay in the valley. There is no possibility for accommodation or dining. You can set up a tent or parc with a motorhome one night (not allowed to stand on private land). Remember to shop in Kirkenes before you go.